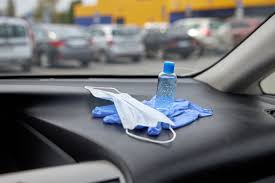 In the heat of recent days, it has become a hit again whether or not you have to worry about someone storing the hand sanitizer in the car. Recently it has been illustrated with a burning car what can happen if someone forgets a small moment like to take the disinfectant with them. Previously, Texas firefighters also claimed this – though, since then it has become clear that the ominous images were not taken there and not then, later the post was rather removed. This, of course, still sounds unlikely to be so hot in a car parked on a hot day that the alcoholic gel spontaneously ignites.

What does science say?

In general, science provides fairly exact answers to similar questions, but before that some concepts known from physics classes need to be revived. Combustion requires a combustible material (such as a car upholstery), a gas that feeds combustion, which is practically oxygen, and the combined presence of the temperature required for combustion. If any are missing, there is no burning. The flash point is the lowest temperature at which the vapor of a volatile liquid forms an ignitable mixture with air. This should not be confused with the auto-ignition temperature when no ignition source is required to start the combustion.

Alcohol has a low flash point and is therefore flammable. On the other hand, its auto-ignition temperature is above 300 degrees Celsius, and it’s not that hot even in a top-burning oven, especially not in a car left in the sun.

Therefore, unless you park in Hell, then it is impossible for the hand sanitizer left in the car to ignite spontaneously.

However, anyone who has eaten special flavoured pancakes or a flaming cocktail knows that alcohol is an easily combustible substance that continues to burn even after the fire source, i.e. the match or lighter, is taken away. This is a feature that you may be worried about but not only for alcoholic hand sanitizers, but for all flammable substances.

The National Directorate General for Disaster Management said that storing flammable materials in a car poses an increased risk. It’s worth looking at the storage temperature on the packaging first, because if it says you need to store something below 40 degrees, it can be dangerous in a car that warms up to 70 degrees in an hour.

It is very unlikely that a car will burn out because of a hand sanitizer, for example, but anyone who has smoked a leaf with a magnifying glass as a child knows that glasses forgotten in a car may also be able to act as a source of ignition. While there is little chance of this, it cannot be completely ruled out. A propellant spray can also be dangerous, even an explosion, and an ignition source can be a shorted wire or a spark in the event of a central lock malfunction.

Therefore, hand sanitizer and other flammable materials should not be exposed to the scorching sun. It’s worth putting the disinfectant in a more shady storage compartment in your car, but it’s really better to take it with you, of course, it’s not just the risk of inflammation that’s the reason.

Overall, there is a greater chance that a hand disinfectant forgotten in the car will become unusable than that the car will burn because of it. A hand sanitizer is effective against viruses and bacteria if the alcohol content of the mixture is higher than 60 to 70 %. If the alcohol starts to evaporate from it, the alcohol content can quickly fall below 60 %, which results in you rubbing your hands with it in vain, quite simply not protecting you as effectively against pathogens. This can be a problem especially for hand sanitizers that do not exceed the expected alcohol content anyway. In addition, it is quite difficult to visually determine when alcohol has reached a critical level. Experts advise, as a rule of thumb, that if the mixture is unexpectedly difficult to press because it is as if it is thicker than usual and more difficult to dry on the user’s hand, it is likely that the disinfectant already gives a false sense of security and contains too little active ingredient. .

There are things that, on the other hand, really shouldn’t be left in the car. The disaster officer said it was not only because of hand sanitizers that it was worth paying more attention to what one was leaving in the car, but overall, one had to be careful about who stored what in their car.

Most of what a person can do is regularly maintain the car, do not smoke in the car, and do not contain flammable material in it.

It is not typical, but there is a hand sanitizer on the market that is available in the form of a propellant spray. Here, not only the hand sanitizer, but the packaging is dangerous, just as it is true that other propellant, spray-packaged products should not be left in the scorching sun at high temperatures. The propellant of the spray is explosive propane-butane gas. As the temperature in the car rises, so does the spray left and at the same time the pressure in it increases until it reaches the breaking point. Here, the bottle can also explode, as the splitting of the bottle can cause sparks, which can ignite the flammable material.

Likewise, do not leave lighters, paint or thinner in the car on a hot day, as these can be dangerous.

32 % of cases start from the interior, usually caused by an electrical fault.

Interesting article in a commercial social newspaper. Still an open point, and it leads to discussion. It clearly shows that explosion protection becomes a more general issue and shall be scope of further consideration in our daily life.

What level of explosion protection is achieved shall be clearly defined as per policy. Few years back we have introduced an expression: SEP – site Ex policy. It has become a level of value, where pre-defined level is there and clear path is given for all site (project) related to-do-s.

In order to reduce the risk of explosion, elimination of one or