A hydrogen generation plant experienced a fire and significant damage due to a concussive combustion event that started in a high-pressure hydrogen feed pipe.

A certain hydrogen plant is designed to continuously produce hydrogen at a purity of 99.75% and at a rate of 510 m3 per day. Hydrogen is produced in two banks of cells filled with a strong solution of caustic soda. Current is passed through the cells to produce hydrogen and oxygen. The oxygen is vented directly to the atmosphere, while the hydrogen is piped to the gasholder. The gasholder is a low-pressure storage vessel capable of storing 28 m3 of gas. It is constructed in two parts. The bottom section is a large round tank. The upper section is an inverted tank or bell that is free to move within the main tank as pressure increases or decreases. The main tank is filled with water to form a water seal. Hydrogen from the cells enters the gasholder above the water line, causing the bell to rise. 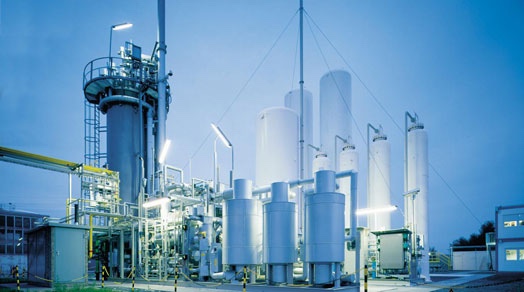 The purity of the hydrogen is monitored between the cells and the gasholder. If purity falls below 99.5%, the hydrogen is vented to the atmosphere. The plant is installed with two 100% duty compressors. Hydrogen is drawn from the gasholder by the duty compressor via the gas dryer and the filter. It is compressed to 12.4 MPa and delivered via high-pressure (HP) dryers to the storage banks. The plant contains four storage banks capable of storing 460 liters per bank. Each bank consists of 16 cylinders. Each cylinder is fitted with an overpressure protection device called a “bursting disc”.

One afternoon, an assistant operator attended the hydrogen generation plant as part of a routine plant inspection. The plant was functioning correctly and no obvious problems were noted. Approximately one hour later, a large explosion was heard by a contractor in the contractor amenities area and the remaining staff in the administration building. Calls were received soon after by the duty shift manager advising him that there was a fire at the hydrogen generation plant.

Visual inspections of the plant found the high-pressure pipe work had ruptured or parted at the following locations:

Between two valves adjacent to a compressor

At the pressure regulating valve near the compressor room

Above the ‘B’ HP dryer

At the inlet to the ‘B’ bank manifold

At various bottle fittings in ‘B’ bank

In addition, the following damage was noted:

Pipe swelling at the compressor side of the HP regulating valve

Pipe swelling at the HP NRV (dryer side)

Twelve of the sixteen B bank cylinders and six cylinders on C bank had been affected by the heat of the fire. Many of the copper vent pipes from the cylinders to atmosphere were discolored or melted indicating that many of the cylinder bursting discs had ruptured. The vacuum and purge pipe work around B and C banks had been destroyed by the fire. The cladding at the eastern end of the building had been blown out above two storage banks. Debris from the site was distributed for 20 meters.

Explosions in the HP hydrogen feed pipes caused the failure of welds and connections at the storage banks, allowing hydrogen gas to be released in large quantities from the B and C storage banks. The escaping hydrogen self ignited, resulting in an explosion and fire. The cause of the initial explosions was due to the spontaneous ignition inside the HP feed pipes of an explosive mix of hydrogen and oxygen. It is concluded that the ingress of the oxygen to the system was from the hydrogen cells. The prime cause of the contamination was blockages in the water makeup lines to some cells, allowing high levels of oxygen to mix with the hydrogen as electrolyte levels fell. The low-purity hydrogen was not detected by the low-pressure purity analyzer due to the failed isolation transformer. There are a number of other potential air ingress points on the LP system that could have allowed contamination. These points are, however, considered unlikely to have been the cause of the contamination resulting in the explosion.

When Incident Discovered – During Operations

Recommendation 1 – Overhaul and replace the diaphragms on all cells showing low-purity results. Check on a routine basis the individual cell purity levels to monitor the deterioration of performance of individual cells. Certain contaminants are produced as a result of the process that settle to the bottom of the cells. These contaminants, particularly magnetite, can block the water makeup ports and the drain valves. This was found to be the case on 6 makeup ports and on most drain valves. The blocked drain valves made it very difficult to clean the cells and to unblock the makeup ports.

Recommendation 2 – Replace the existing low-purity (LP) purity analyzer with a fail-safe model that ensures the vent valve is opened under the conditions described above. Carry out a risk assessment of the current LP purity analyzers to determine the level of risk associated with a loss of sample flow.

Recommendation 4 – Fit pot-type water seals with open trough water makeup as a replacement for the existing U-tube and pot-type seals The original design drawings for the gasholder show the inlet and outlet pipes extend 50 mm above the water line. The actual measured extension was less than 20 mm. Small variations in the level control could allow water to enter the lines.

Recommendation 5 – The building is fitted with partially closed-in ends that can trap the gas under the roof. The current construction standard for this type of facility is to have the storage banks in an open area rather than inside a building of any kind. Any leakage will then quickly disperse into the atmosphere and not form an explosive mixture. This is not practicable at the current plant, but improvements are possible.

Recommendation 6 – Remove the end sheeting from the building to increase ventilation.

Recommendation 7 – Conduct an investigation into the feasibility of establishing a gas-up station away from the hydrogen generation plant, possibly near the CO2 plant, to allow the units to be gassed from transportable pallets in an emergency.

Big or small – situation is always the same. Ex compliance shall be maintained.

A Sensor for Multigas Detecting

There is a hand operated valve. It does not fall under Ex

I have to make a statement here! Official! Some asked me what 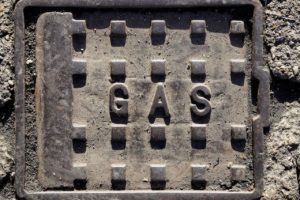