The flammability range of hydrogen-air mixture is stated to be from 4 % (LEL) to 74.2 % (UEL), however this is the case only at room temperature and the range widens with the increase of temperature. At 400°C it is already 1.4 % to 87.6 %, so in fact any mixture is combustible. There are further characteristics which make hydrogen so special: its gas-air mixture can be ignited with as little energy as 0,017 mJ, about 40-times less than required by gasoline-air mixture to ignite.  For comparison, one cannot feel an electrostatic shock under 1 mJ. To exacerbate the risk, a perfectly burning mixture of hydrogen has a high temperature of 2318 K, but it  is mostly invisible.

Consequently, the common human senses that warn us a dangerous situation is developing – sight, smell, sound – are useless in dealing with a hydrogen leak.  Only industrial quality instrument monitoring is suitable, but this is far too expensive and complex for mass consumer application. 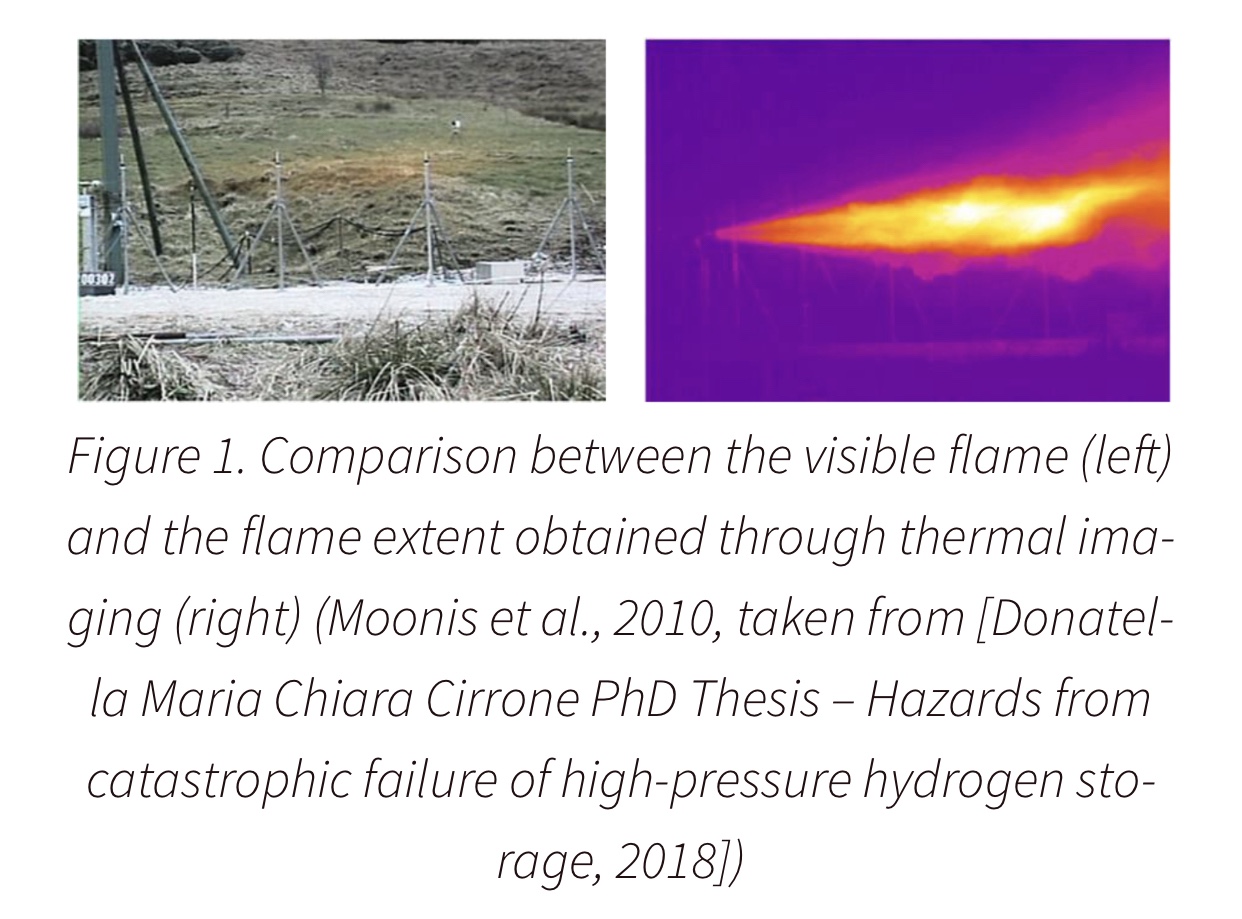 The seriousness of this hydrogen ignition phenomenon is increased by the propagation velocity of a flame, which is about 6 times the speed of that of the frequently used hydrocarbons such as gasoline or propane. One should also be alert that hydrogen release or leak from a highly pressurized container creates  static electricity which in turn can then self-ignite the releasing gas.

A release of unattended pressurized hydrogen excess into the air is accompanied by a jet flow and blast wave and a short lived  high temperature “hemispherical cloud” which is like a fireball. “The speed of detonation wave depends on a composition of hydrogen-air mixture. In stoichiometric mixture it can be as high as 2000 m/s. The safety of hydrogen automotive applications and the related infrastructure, including garages, maintenance workshops, underground parking, and tunnels, is a main area of concern.” [HyTunnel-CS_D1.2 – Report on hydrogen hazards and risks in tunnels and similar confined spaces, 2019].

Policymakers and members of the public assume that these  hydrogen (H2) molecule-related risks  are well known and the large-scale automotive industry has found safe means to address them. However, when  industry is under intense pressure to perform to a certain societally expected standard in a cost-competitive environment, it cannot keep everything under control or industry may find shortcuts that only appear to meet the objectives. If someone doubts this, they should familiarize themselves with the diesel emissions scandal, which shows how the systematic and self-confident  “solutions” were the fault of most of the OEMs.

Compared to the diesel emissions scandal, it is consumer activity in hydrogen vehicle fueling that is the unaddressed challenge and hazard, rather than conformity to the existing regulations. Political forces are naïve to believe that, by decree or legislation, they can solve all those problems of working with hydrogen that have been detected within the last 50 years.

Let us review some risk statements, from the last few years declared by respected research centres:

▪ The Sandia National Laboratories: “Relatively large amounts of hydrogen often soluble in polymer materials; therefore, exposure to high-pressure hydrogen may cause damage (blistering or swelling) of the polymer materials. This is manifest in high-pressure applications due to depressurization of a system (or rapid temperature changes) as hydrogen expands in free volume and at interfaces within the polymers.”

▪ The HyCOMP project report noted about the safety calculation of the high-pressure fuel tanks: “As a result for the long-term operation, the increase in damage accumulation rate due to the elevation of the temperature could significantly affect the lifetime of the composites. It was calculated that the lifetime for the composites subjected to creep test at 70% of the average failure stress decreased from 2e+27 years to 0.2 year when the ambient temperature changed from the room temperature to 90 °C.” Despite  reaching this conclusion, there was no responsive suggestion for a reduction of the Safety Factor for the different regulations which actually exist for the high-pressure hydrogen storage.

▪ In a tank rupture in a fire accident report by Lionel Perrette, Helmut K. Wiedemann concluded: “This remark underlines that tank fire protection and bus fire safety can not rely only on the performance of isolated protected tank systems.” – This can be explained; safety regulations are not sufficient to address the uncertainties of physical and chemical risks, particularly in moving vehicles that can encounter any number of unexpected circumstances that may lead to a crash or accident where the tank could rupture or the vehicle start on fire.

▪ Robert Zalosh in life simulating and analysing the vehicle tank incidents: “The results of these tests suggest that the danger zone associated with hydrogen cylinder rupture extends to a radius of roughly 100 m from the hydrogen vehicle.” This is about the length of a football field ».

▪ The European FP6 & FP7 supported HySafe project was daring enough to enforce the knowledge base of the hydrogen technology related incidents, but to remove barriers to deployment, stating: “…was to strengthen, integrate and focus fragmented research efforts to provide a basis that will allow removal of safety-related barriers to the implementation of hydrogen as an energy carrier. Synthesis, integration and harmonization of these efforts aimed at breaking new ground in the field of hydrogen safety and at contributing to the increase of public acceptability of hydrogen technology within Europe by providing a basis for communicating the risks associated with hydrogen. One of the means to achieve those objectives was the development and establishment of the Hydrogen Incident and Accident Database, HIAD”…HIAD is intended to become the up-to-date repository of any accidental event related to hydrogen technology.” – Well, this was an excellent initiative. BUT, the collected information database is NOT publicly available anymore for an unknown reason. Perhaps someone thought that it is better to hide this evidence from the public? As communicated by HIAD up to 2012; they had collected 250 hydrogen related accidental events with 835 people involved. The data base has been growing continuously since.

▪ The French Ministry’s ARIA Database recent publication [Hydrogen and transport: the risks should not be underestimated, 2020] makes it clear: “An analysis of 372 events involving hydrogen (produced or generated accidentally) in the ARIA database is a reminder that hydrogen remains a hazard even for proven industrial processes. For example, 73% of hydrogen incidents involved fires and/or explosions, 27% involved non-burning hydrogen leaks or hydrogen-induced stresses on materials without human consequences, 15% of fires and/or explosions involving hydrogen resulted in the death of at least one person and 43% resulted in injuries.” – while they stating it in an earlier publication – “With regard to the origin of accidents involving hydrogen, the analysis shows that in over 70 % of the cases “organisational and human factors”contribute to the deep-rooted causes of the accidents. Constant vigilance must be called for at all hierarchical levels in the facility – management, supervisory staff, technicians, subcontractors – while bearing in mind that there is a permanent risk of ignition in the presence of hydrogen.” [bold added]

▪ Even the big promoter of hydrogen in transport, the International Energy Agency’s working group (Hydrogen Implementing Agreement) wrote: “The lack of operating experience with hydrogen energy systems in consumer environments continues as a significant barrier to the widespread adoption of these systems and the development of the required infrastructure…. Although an understanding of hydrogen’s physical properties is well established, and there have been many experimental efforts attempted to fully characterize risks and hazards related to hydrogen, the actual risks and hazards are best be determined within the context of real systems and real operating experience. Likewise, previous experience with hydrogen has not been with systems that will interface with consumers, but in controlled environments using trained personnel.” – 2014.[bold added]

What has happened since 2014 when IEA wrote that H2 is not suitable for public application? For example: a tiny leakage which happened in a Norwegian fuel station in 2019, despite the fact that it was produced and operated by one of the most experienced companies that deals with hydrogen globally, and that the station was not more than 2.5 years old. The leakage happened because of bolts around an O-ring that were not properly torqued. The blast wave that followed sent parts of the station which were found in a 200 m radius, just to mention one figure.

As it must be clear from the words above that hydrogen – in consumer hands – constitutes a risk for society. While a very expensive part of the hydrogen system in the vehicle, i.e. the tank, has only a lifetime of 15 years as limited by the respective regulation, the vehicle fleet in Europe even in the wealthier EU member states is drastically ageing, while the poorer countries are reporting around or sometimes over 15 years as the average age of the current car stock. The European emission regulations have been forcing a rapid acceleration of the vehicle price, while the latest Euro 6d has effectively eliminated most of the small and mid-category entry priced new vehicles from the market. As a consequence, the ageing of the vehicle stock is speeding-up within the EU, and so it is in their used vehicle markets in the Balkans and in Africa. To replace a hydrogen tank after 15 years costs more than an average used vehicle nowadays, which means vehicle owners will not readily to replace them. As it is stated, and as de facto accidents have demonstrated, if a  tank is overused it destroys everything in its surrounding. 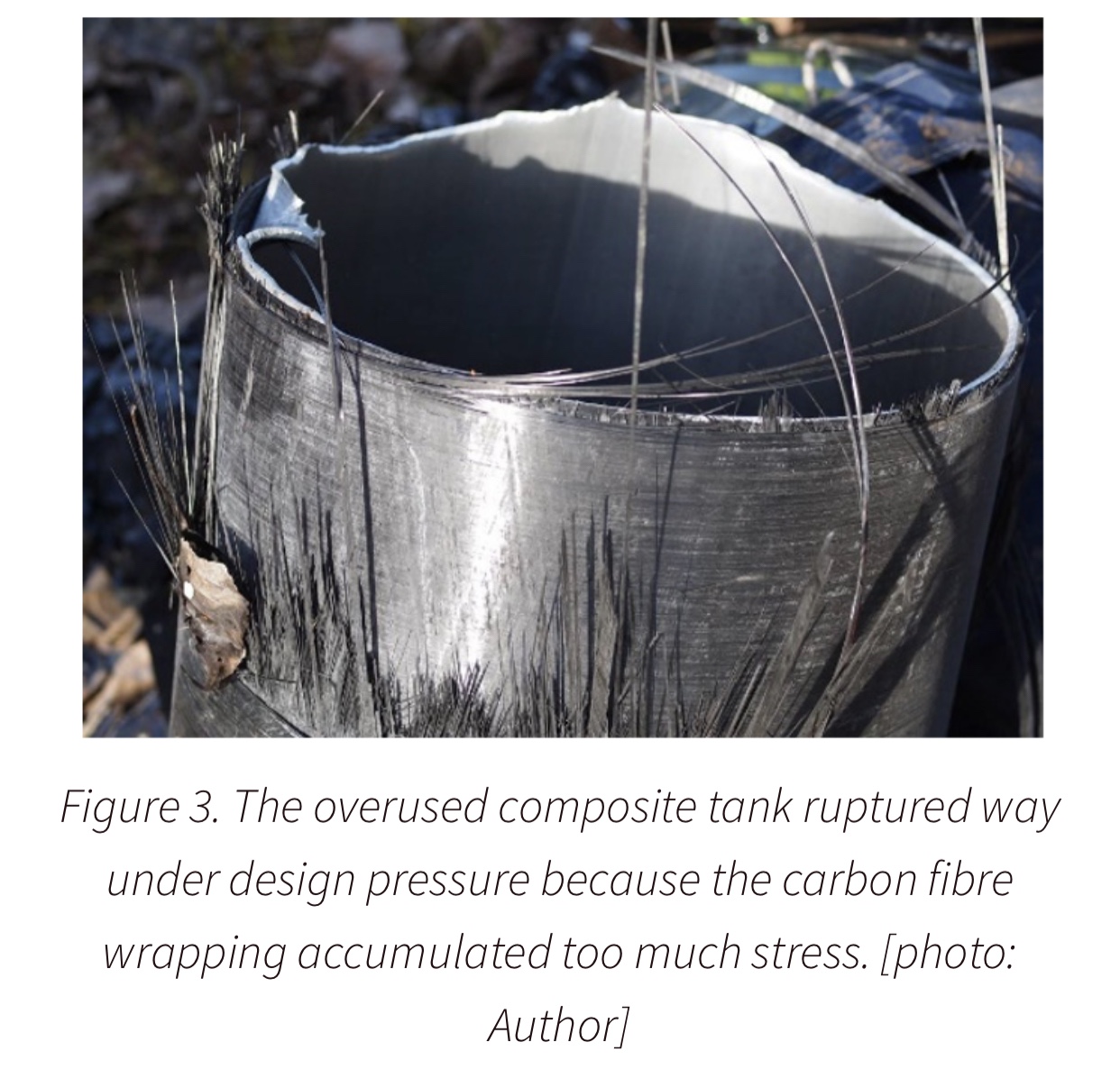 New/old trend we consider H2 as next generation fuel. Which is good. Let us simply not forget H2 is with Ex parameters.