Hydrogen is easy to transport easy in long-distance and can be transported in different formats.

The most common hydrogen transportation means, covering the needs of the different hydrogen markets, are:

Gaseous hydrogen can be transported in small to medium quantities in compressed gas containers by lorry.

The tubes are usually made of steel and have a high net weight. This can lead to mass-related transport restrictions. The newest pressurized storage systems use lighter composite storage containers for lorry transport.

A tube trailer cannot store compressed gas as compactly as a tanker for liquid fuels (petrol or diesel fuel). This means that the available tank volume for hydrogen per tanker is lower. Single tube trailers carry approximately 500 kg of hydrogen, depending on the pressure and container material.

The largest tank volumes for gaseous hydrogen transport are currently 26 cubic meters. Taking account of the low hydrogen density factor at 500 bar, this results in a load of around 1,100 kg hydrogen per lorry. This figure extrapolates to approximately 12,000 normal cubic meters of hydrogen. At 250 bar both the weight of hydrogen and its transport volume in Nm 3 would be roughly halved.

As an alternative, hydrogen can be transported in liquid form in lorries or other means of transport. In comparison to pressure gas vessels, more hydrogen can be carried with an LH2 trailer, as the density of liquid hydrogen is higher than that of gaseous hydrogen. Since the density even of liquid hydrogen is well below that of liquid fuels, at approx. 800 kg/m 3 , in this case too only relatively moderate masses of hydrogen are transported. At a density of 70.8 kg/m3 , around 3,500 kg of liquid hydrogen or almost 40,000 Nm3 can be carried at a loading volume of 50 m3. Over longer distances it is usually more cost-effective to transport hydrogen in liquid form, since a liquid hydrogen tank can hold substantially more hydrogen than a pressurized gas tank. For the purposes of liquid transport the hydrogen is loaded into insulated cryogenic tanks. LH2 trailers have a range of approximately 4,000 km. Over the journey time the cryogenic hydrogen heats up, causing the pressure in the container to rise.

Similarly, to lorry transport, LH2 can also be transported by ship or by rail, provided that suitable waterways, railway lines and loading terminals are available.

A pipeline network would be the best option for the comprehensive and largescale use of hydrogen as an energy source. However, pipelines require high levels of initial investment, which may pay off, but only with correspondingly large volumes of hydrogen. Nevertheless, one possibility for developing pipeline networks for hydrogen distribution is local or regional networks, known as micro-networks. These could subsequently be combined into transregional networks.

Worldwide there are already (2016) more than 4,500 km of hydrogen pipelines in total, the vast majority of which are operated by hydrogen producers (HyARC 2017). The longest pipelines are operated in the USA, in the states of Louisiana and Texas, followed by Belgium and Germany.

Blending hydrogen into natural gas pipeline networks has also been proposed as a means of delivering pure hydrogen to markets, using separation and purification technologies downstream to extract hydrogen from the natural gas blend close to the point of end use. As a hydrogen delivery method, blending can defray the cost of building dedicated hydrogen pipelines or other costly delivery infrastructure during the early market development phase. Until well into the 20th century, hydrogen-rich town gas or coke-oven gas with a hydrogen content above 50 vol% was distributed to households in Germany, the USA and England, for example, via gas pipelines – although not over long distances, for which as yet no experience is availability. Infrastructure elements that were installed at the time, such as pipelines, gas installations, seals, gas appliances etc., were designed for the hydrogen-rich gas and were later modified with the switch to natural gas. Many countries have looked at adding hydrogen into the existing natural gas networks. For the USA, it would be possible to introduce amounts from 5 vol% to 15 vol% hydrogen without substantial negative impact on end users or the pipeline infrastructure.

At the same time, the larger additions of hydrogen would in some cases require expensive conversions of appliances. In Germany this limit has been set somewhat lower, at up to 10 vol%. In principle, gas at concentrations of up to 10 vol% hydrogen can be transported in the existing natural gas network without the risk of damage to gas installations, distribution infrastructure, etc. However, a number of components have been listed that are still considered to be critical and to be generally unsuitable for operation with these hydrogen concentrations. For CNG vehicles, the currently authorized limit value for the proportion of hydrogen used is only 2 vol%, depending on the materials built in.

It can be assumed that many of the gas transport networks, distribution lines and storage facilities that were operated in the past are still in use today. In Leeds (UK), for instance, the possibility has been explored of converting the existing natural gas network in the region (used primarily for municipal heating supply) entirely to hydrogen. Given their length, the large gas networks in many industrial countries could store considerable amounts of hydrogen. 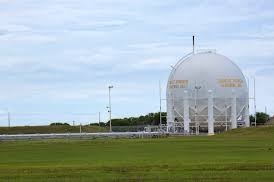 Important to note that H2 might be next generation fuel soon in near future, and related to Ex Safety all possible Ex compliance issues shall be considered specially focusing on logistic, loading, un.loading, storage and more.

Many say that inspection shall happen every 36 months for fix installations,